Every time I work on a computer I clean the dust and visually inspect the innards. One of the things I look at inside of the machine is the capacitors on the main board. There is a known common problem that is causing some capacitors to leak and fail thus become bad capacitors.

The first flawed capacitors were seen in 1999, but most of the affected capacitors were built in the early to mid 2000 s, and while news of their failings( usually after a few years of use) has forced most manufacturers to fix the flaws, some capacitors were still being sold or integrated into designs as of early 2007.

An incorrect electrolyte formula within a faulty capacitor causes the production of hydrogen gas, leading to bulging or deformation of the capacitor’s suit, and eventual vent of the electrolyte. In rare cases, bad capacitors have even been reported to pop or explode forcefully.
Although modern manufacturing techniques normally ensure they vent safely rather than explode, manufacturers have been known to omit the key safety features that allow this.

What to Look For Visually in your computer

Sitting crooked on the circuit board as the bottom rubber plug is pushed out.

# Electrolyte( a crusty brown substance) leaked onto the motherboard from the base of the bad capacitor.

# Venting from the top of the capacitor, visible as rust-like brown deposits, or a visible hole in the vent such as the image 1 and 2 displaying bad capacitors 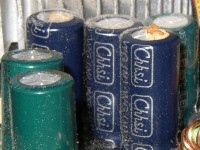 # Not turning on all the time; beeping noises; having to hit reset or try turning the computer on again.

# Memory errors, especially ones that get more frequent with time.

# Spontaneous reboots, or freeze while booting.

Still unsure? Then consider giving us a chance to help you decide the best course of action for your situation, as we are highly flexible with a no fix no fee policy along with being one of the leading computer repair specialists along with computer/server build specialists.

Best Computer Repair Bridgend and South Wales U.K can also offer worldwide remote support, virus removal, or even custom-built gaming PCs with competitive rates, contactless payment, and delivery, along with a friendly, professional service that can’t be beaten anywhere else.

Why not contact us today here or say hello in the live chat at the bottom right of the page. Thank you for reading and have a wonderful week! 🙂